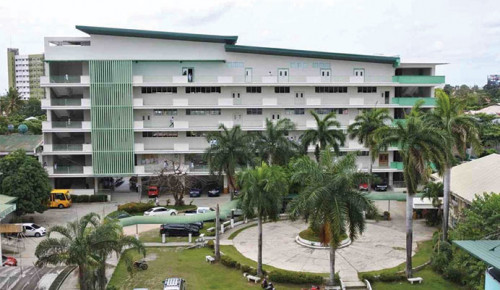 The University of the Visayas was founded by the late Don Vicente Gullas in 1919 as the Visayan Institute (V.I.) in Cebu City. It was not until 1935 that the Visayan Institute moved to its present site in Colon St. The Second World War, however, razed to the ground the physical facilities of the VI but undaunted by adversities, Don Vicente Gullas reopened classes in Argao, Cebu in 1946. A year later the VI moved back to its present site in Colon Street where the buildings of its main campus now stand as a historical landmark in the City of Cebu. In 1948, the Visayan Institute was conferred a University status by the then Bureau of Private Schools, the first to become a University in Cebu. The VI was renamed the University of the Visayas. From that time on, the expansion in its baccalaureate and post-graduate course offerings and its physical facilities has been phenomenal. From an initial enrolment of 37 students and only a high school department, the VI evolved into a University with an enrolment which at one time in the 1980s peaked at 29, 000 distributed throughout its various campuses.

Cebu is a province of the Philippines, in the country’s Central Visayas region, comprising Cebu Island and more than 150 smaller surrounding islands and islets. Its prosperous port capital, Cebu City, retains landmarks from its 16th-century Spanish colonial past, including the Basilica Minore del Santo Niño church and triangular Fort San Pedro. Tops, an observation deck on Mt. Busay, has sweeping views over the city.

UV Gullas College of Medicine is one of the most sought-after medical institutes, especially for Indian students. The affordable fee structure for MBBS and affiliation with MCI make this university favorable for the students.

The hostels at UV Gullas College of Medicine are large, spacious, comfortable, and coated with various kinds of amenities. The hostels for boys and girls are monitored through CCTV cameras round-the-clock. North and South Indian food is provided to Indian students three times a day.