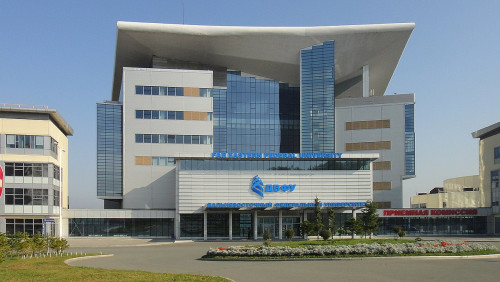 Far Eastern Federal University is one of the top-rank universities of Russia that acts as a platform between Russian and global experts. The university plays a crucial role in economic development by participating in both activities like socio-economic and cultural development of the Russian Far East. The university is known for providing excellence in education and offering scholars and researchers for the next generation.

Far Eastern Federal University is located on Russky Island that is 18 km away from Vladivostok.  The city is approx 331 square kilometers and is a properly managed city. It has good connectivity from India and other parts of the world. From India, it is only 16 hours flight from New Delhi with only 1 halt in Moscow. The city is beautiful to visit and stay.

The university is home to more than 60 international students. Among, 20 students are from India and others are from China, Korea, Japan, Malaysia, Vietnam, the Philippines, and other countries.

MBBS From Far Eastern Federal University is accepted worldwide. The degree is approved by MCI (Medical Council of India) and WHO (World Health Organization). The faculty is highly professional and experienced which helps to develop and enhance personal and professional skills. For the first two years of MBBS, the language of study is English with the compulsory two hours of classes for the Russian Language. From the third year, students start practical training, and they have to deal with Russian patients, and other staff accordingly they should have knowledge of the Russian language.

The hostel of Far Eastern Federal University is located in the city of Vladivostok. Usually, Indian students stay at hostels that include all facilities from sports to academics. It also includes gyms, swimming pool, other athletics track, tennis court, basketball court, and stadium.