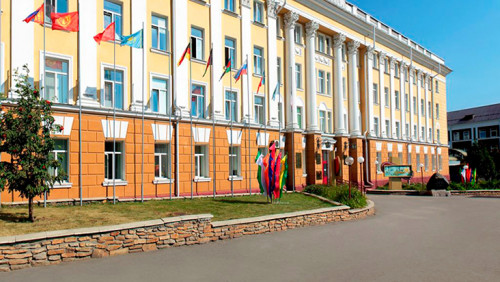 Altai State Medical University has been imparting quality education to students from across the world since 1954. Incepted by the Council of Ministers of RSFSR, this university is counted among the momentous medical institutes in the world. The university is situated in Barnaul city in the southeast of Russia.

Formerly called the Altai State Medical Institute, the university produces qualified specialists every year. Since its inception, around 30,000 doctors, as well as pharmaceutics, have graduated from AGMU. Every year, over 4000 students study at this prestigious university, out of which around 350 students arrive from other countries. The institute has a thoroughly professional academic staff comprising of over a hundred doctors, 350 candidates of science, 5 honoured scientists of Russia, 3 corresponding members of RAMS, 25 distinguished physicians Russia, as well as 10 honoured workers of the Graduate School.

The Ministry of Health of the Russian Federation administers the Altai State Medical University. The organization is state-financed, which was constructed according to the applicable Laws of the Russian Federation. The university is a part of many renowned organizations in the world including the Shanghai Co-operation Organisation (SCO), Asian Universities Association (AUA), Eurasian Universities Association (EUA), Asia- Pacific Quality Network (APQN), International Association of Continuing Education (IACE) to name a few. It is approved by many leading medical bodies like WHO, MCI, and UNESCO.

The institute has earned accolades for its work in education, research, and cultural exchange. There are over 35 research laboratories in the institute where research and innovative experiments. The institute is ranked 5368 in the 4icu world university ranking.

Barnaul is a famous city and Altai Krai’s administrative centre. It sits at the confluence of Ob and Barnaulka rivers in the West Siberian Plain’s forest-steppe zone. The climate is continental with warm and moderately humid summers and frosty and snowy winters.

It is a prominent industrial centre of Western Siberia with over a hundred industrial enterprises. Moscow is 3,600 km away from Barnaul.

Students from across the world aspire to become a part of this prestigious institution. A great number of Asian students apply for admission every year. The extraordinary teaching standard of AGMU always appeals to Indian students.
This university is (MCI) Medical Council of India and (WHO) World Health Organization recognized.
Easy admission process, no requirement of donation, coming-of-age teaching methodologies, exposure to the practical knowledge, recognized and approved medical programs, excellent faculty, and cheap course fee make Altai State Medical University the most sought-after option for Indian students who wish to study in Russia.
Furthermore, the city is safe for Indian students.

There are three hostels in the Altai State Medical University. There is a separate hotel for foreign students. They are all situated in the centre of the city and are in proximity to public transport.

The hostels have large kitchens, washrooms, and clean bathrooms with 24-hour running hot and cold water. The rooms are large and well-equipped with all the essential things that students need. The central heating system keeps the hostels warm during the winters keeping all the students comfortable. There is a separate floor in the hostel for girls.

There are large sports and playgrounds, as well as reading halls on the campus, for students, as well as teachers.

Requirements For MBBS Admission In Russia